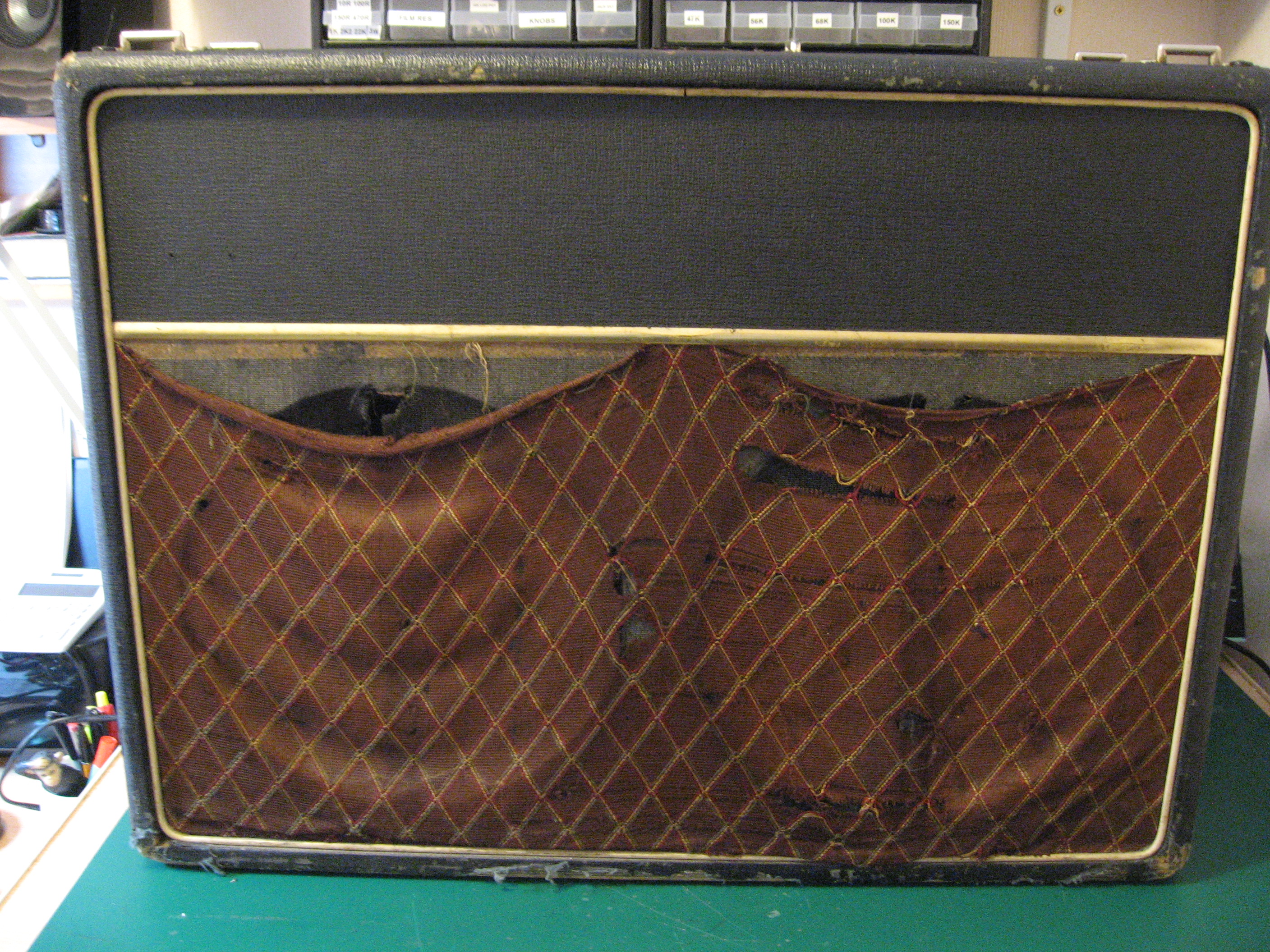 Definitely a players amp this one!

I had an enquiry from a guitarist whose AC30 was out of sorts. He said that it had always been a great amp, but was now lacking in power. (It had always been a very loud amp previously, and could more than hold its own with Marshalls and the like). A tech had carried out some repair work a while back and replaced the mains transformer after a burn out. He also removed the valve rectifier and installed some silicon diodes in its place.

The amp worked OK for a while, but the power output and tone gradually dropped off. The amp had been back to the tech for testing due to the low power, but he felt that it was actually OK and "looked fine on tests".

The guitar player was pretty down about the amp, as it had been so great previously, but now seemed to have lost the magic tone.

The priority was to get the amp back up and running as it should be. (Cosmetics were not a priority!). 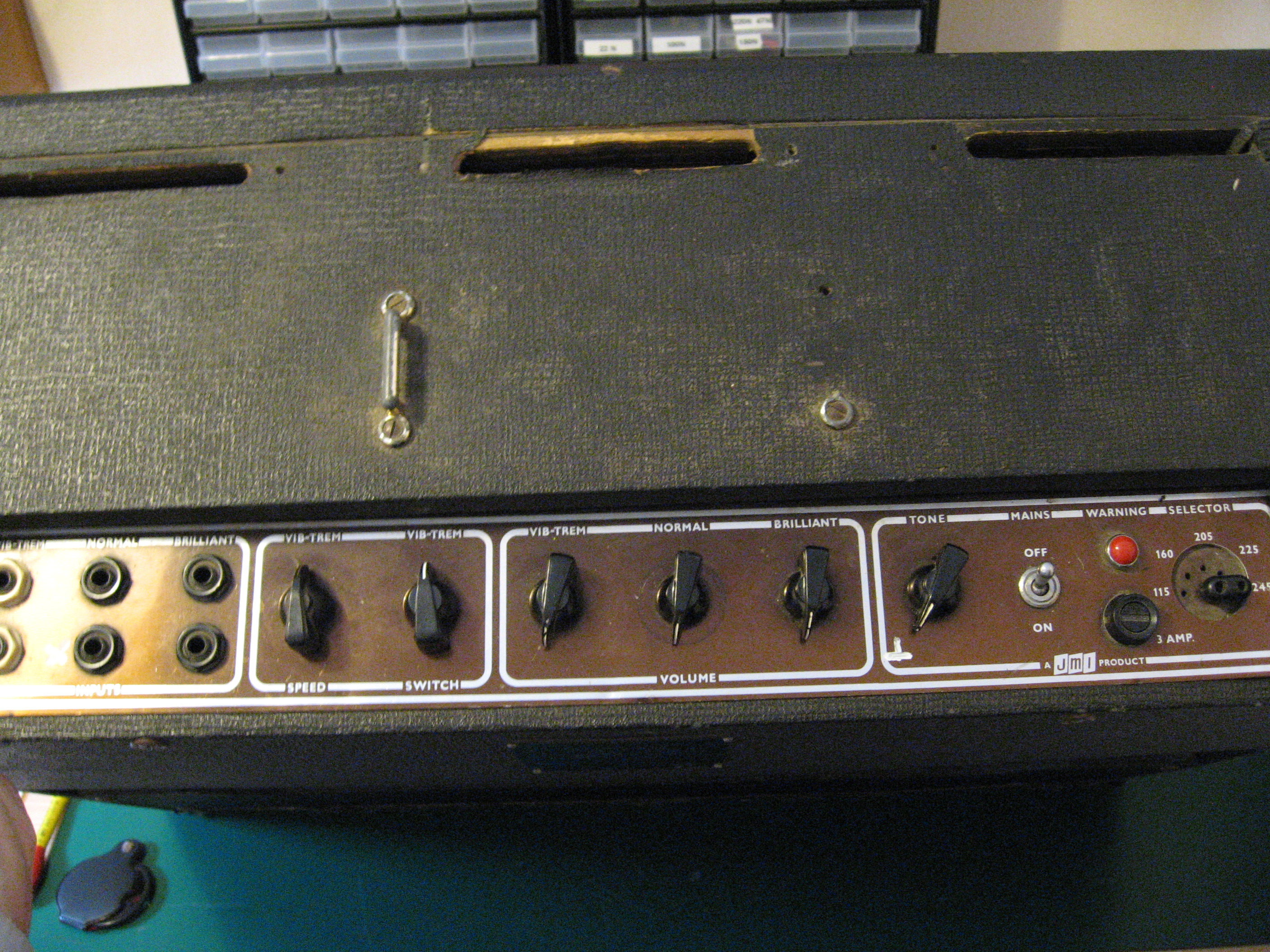 I got the amp into the workshop after meeting up with the chap to collect it, not a pretty sight once I had opened it up! 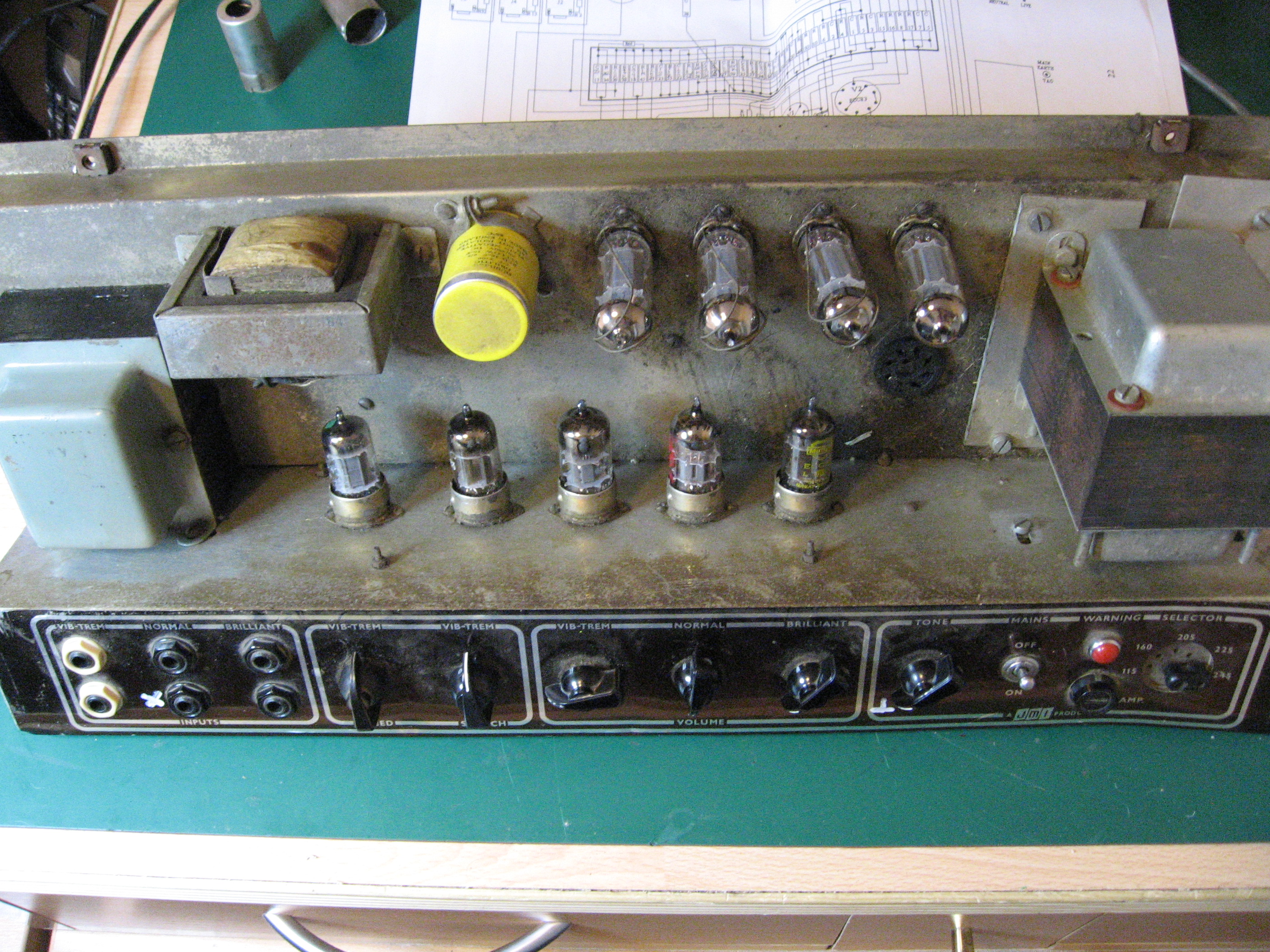 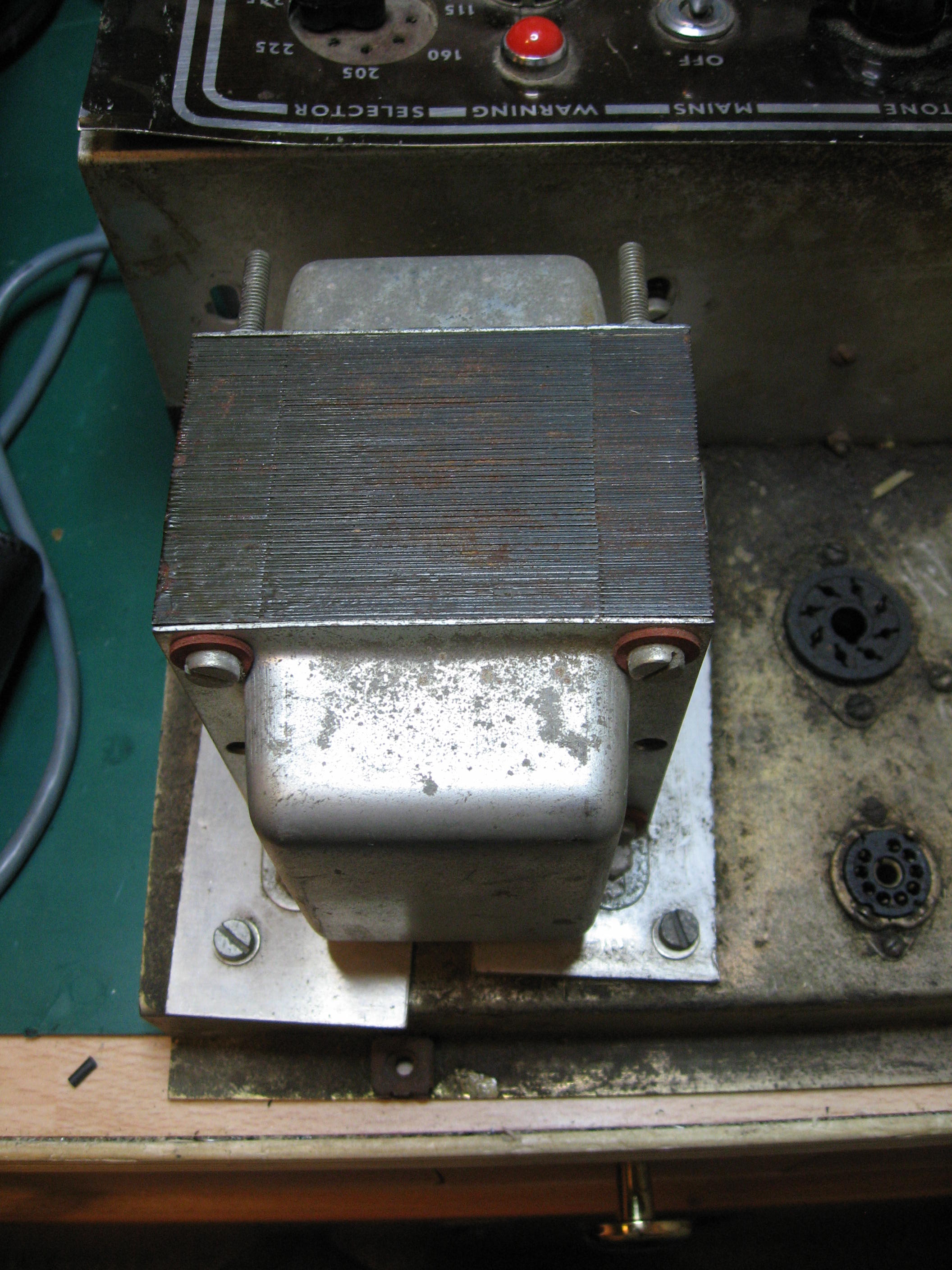 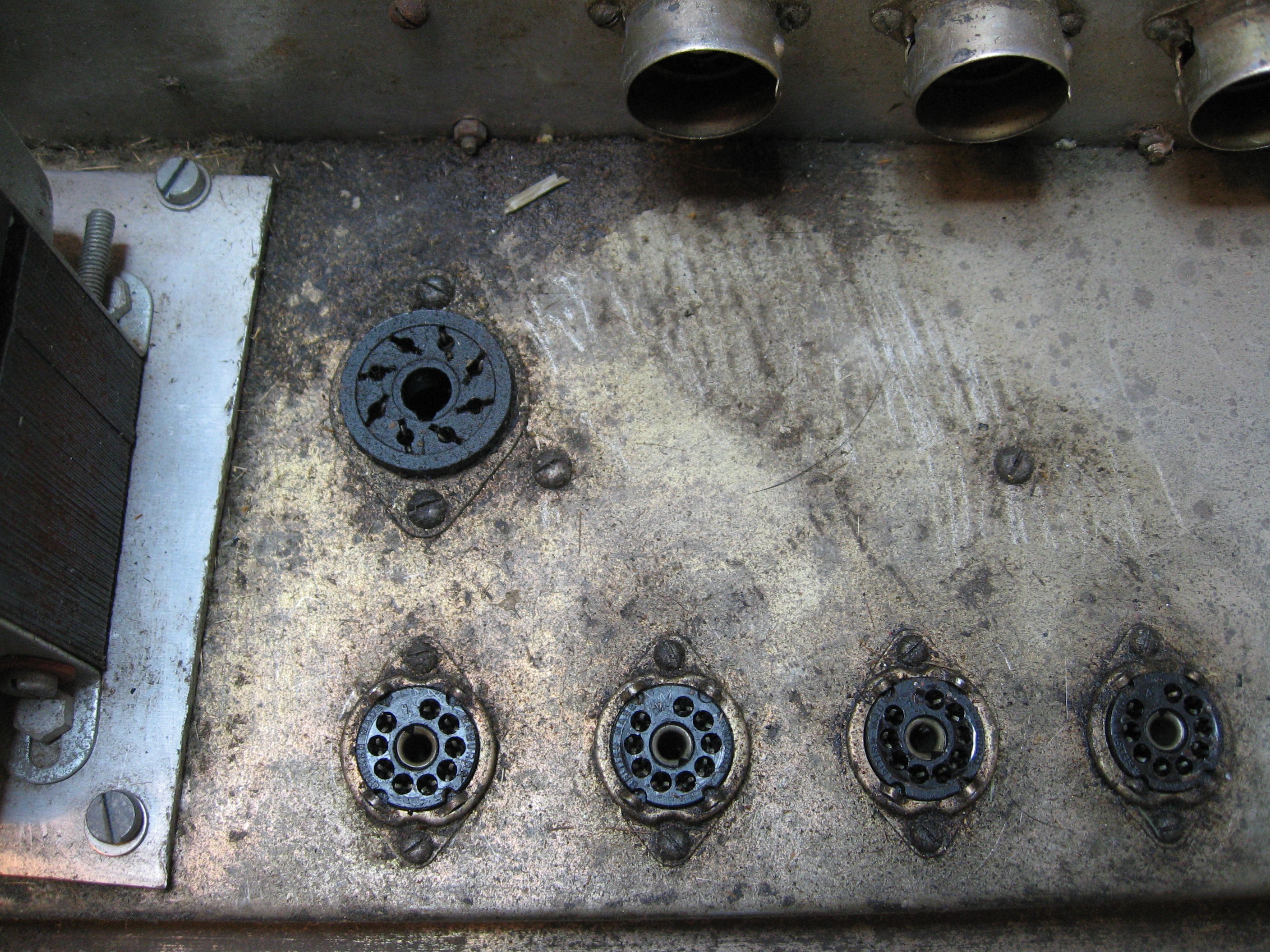 The chassis was in pretty poor condition, with lots of residue from the previous transformer burn out. The replacement had been pretty crudely fitted with irregular aluminium plates added, as the footprint of the transformer was different from the original. A vertical mount transformer had been used rather than a drop through, and it only just fitted into the cabinet with the chassis mounted on the slider board.

I checked the amp over visually, before switching on and testing. It was pretty apparent straight away that the power output was way down, it was only delivering 9.2 watts - a faulty output transformer was the cause of the problem.

I ordered up a replacement, and set to work cleaning up the chassis. 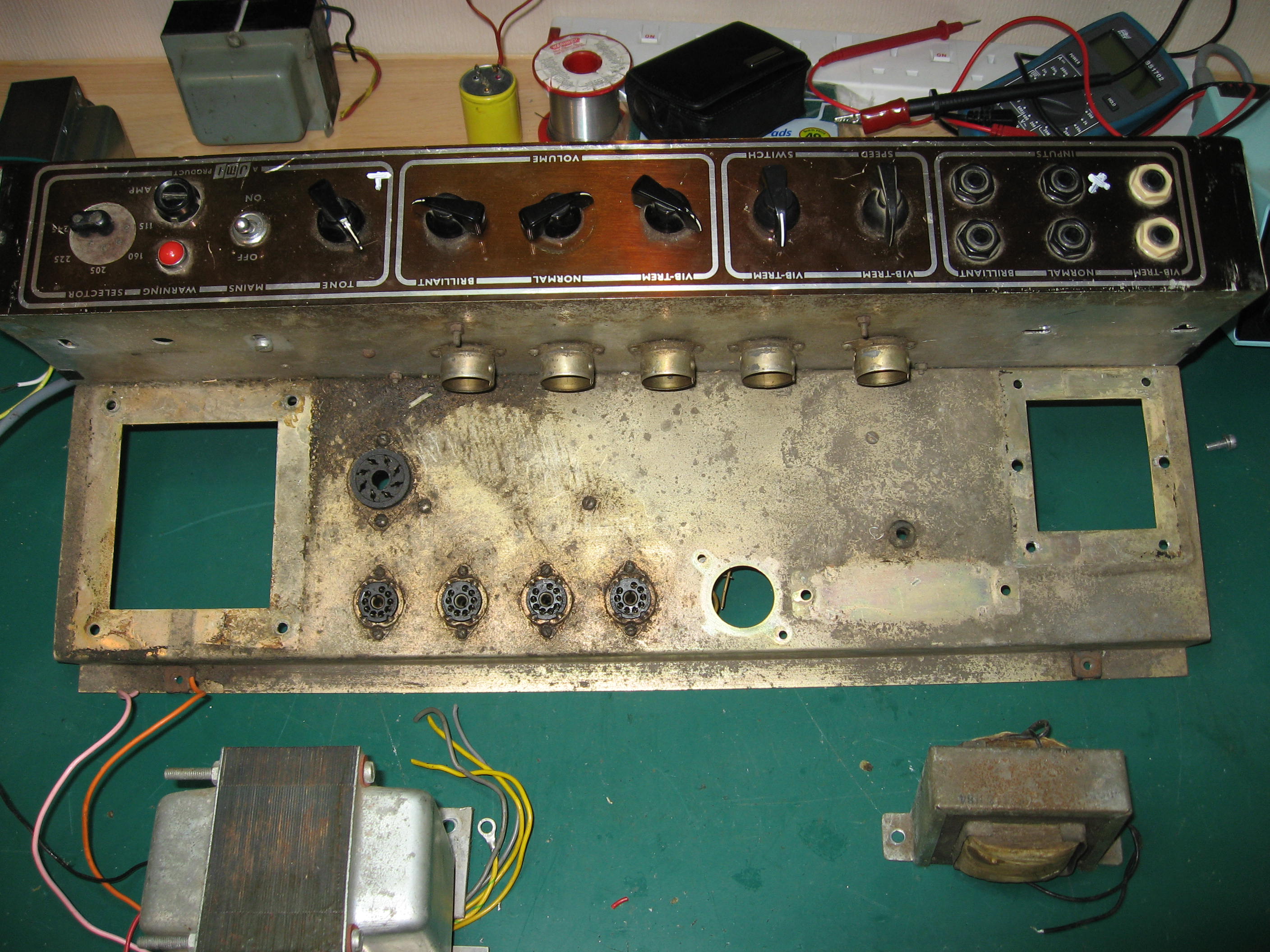 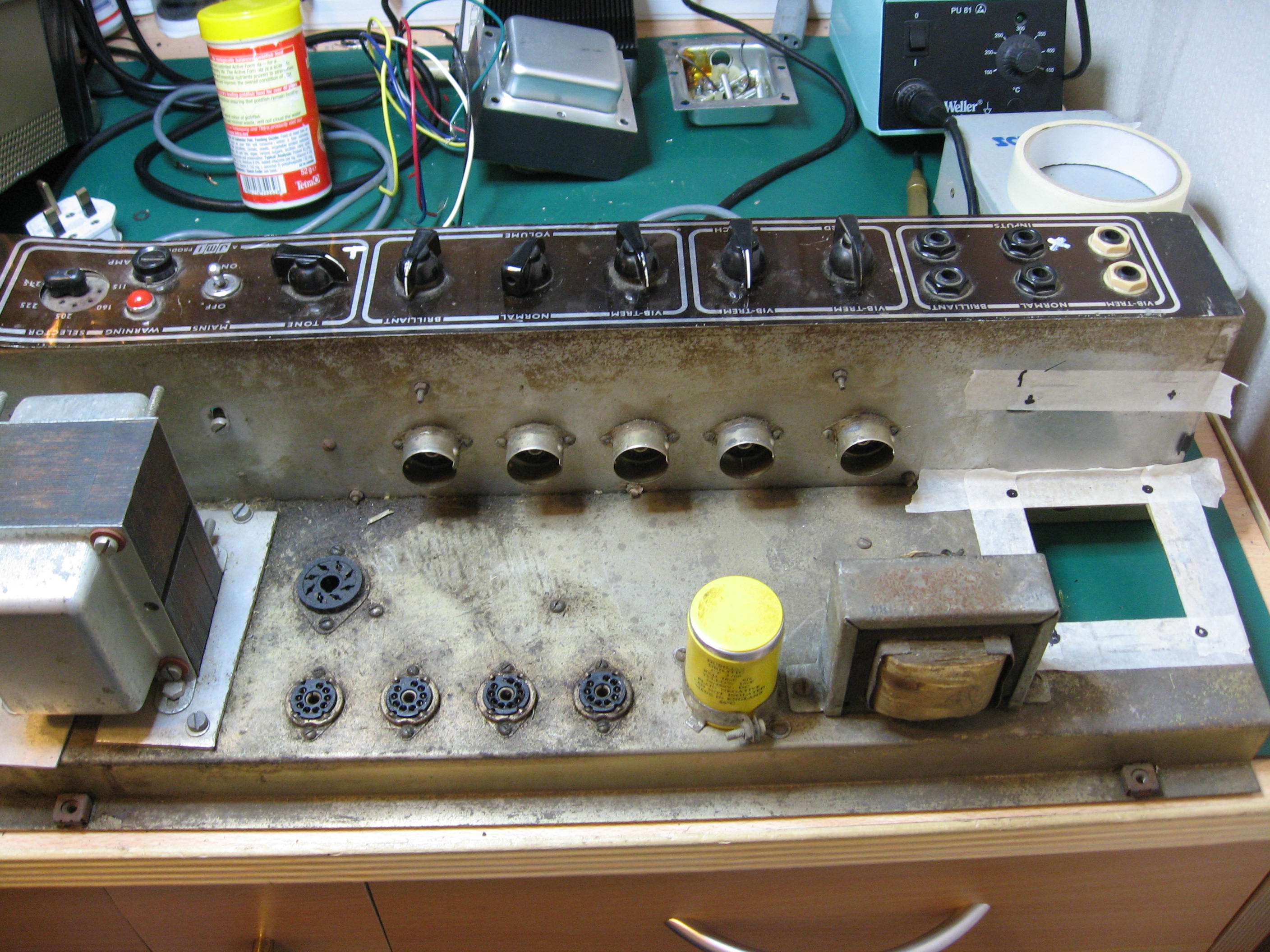 First step, remove transformers and choke from the chassis, and give it a bit of a clean up. I also wanted to tidy up the mounting of the mains transformer as it looked a bit of a mess. 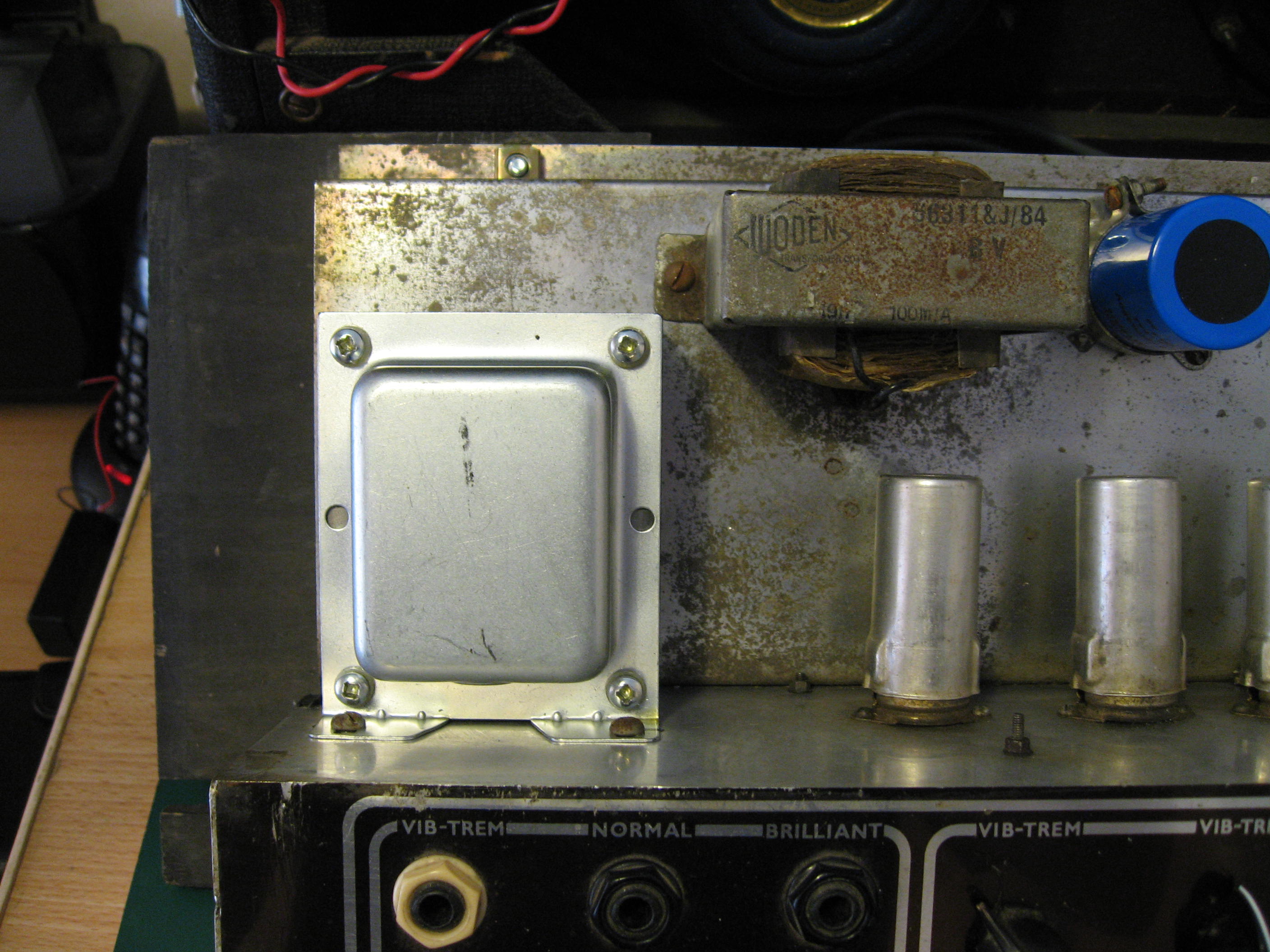 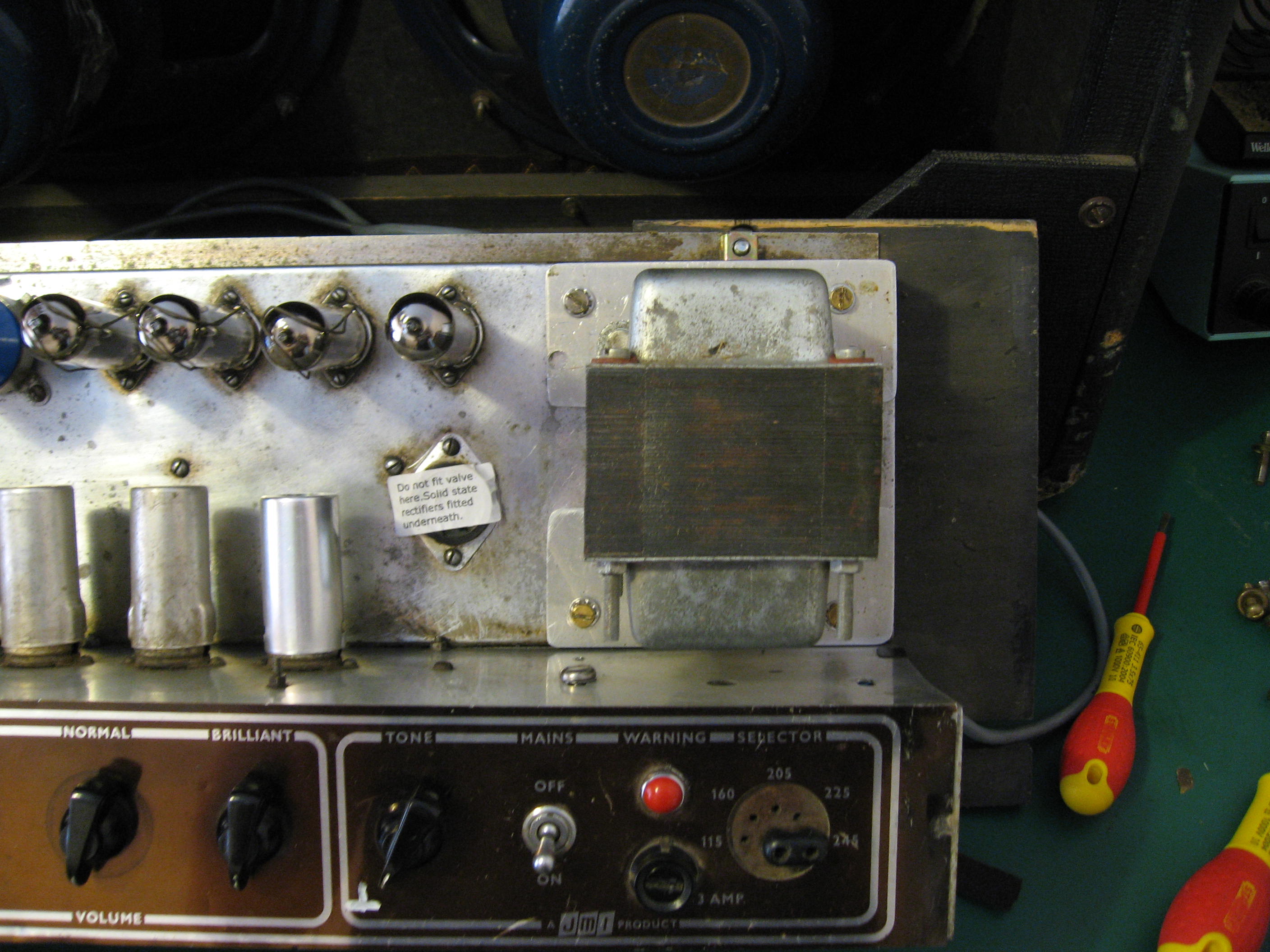 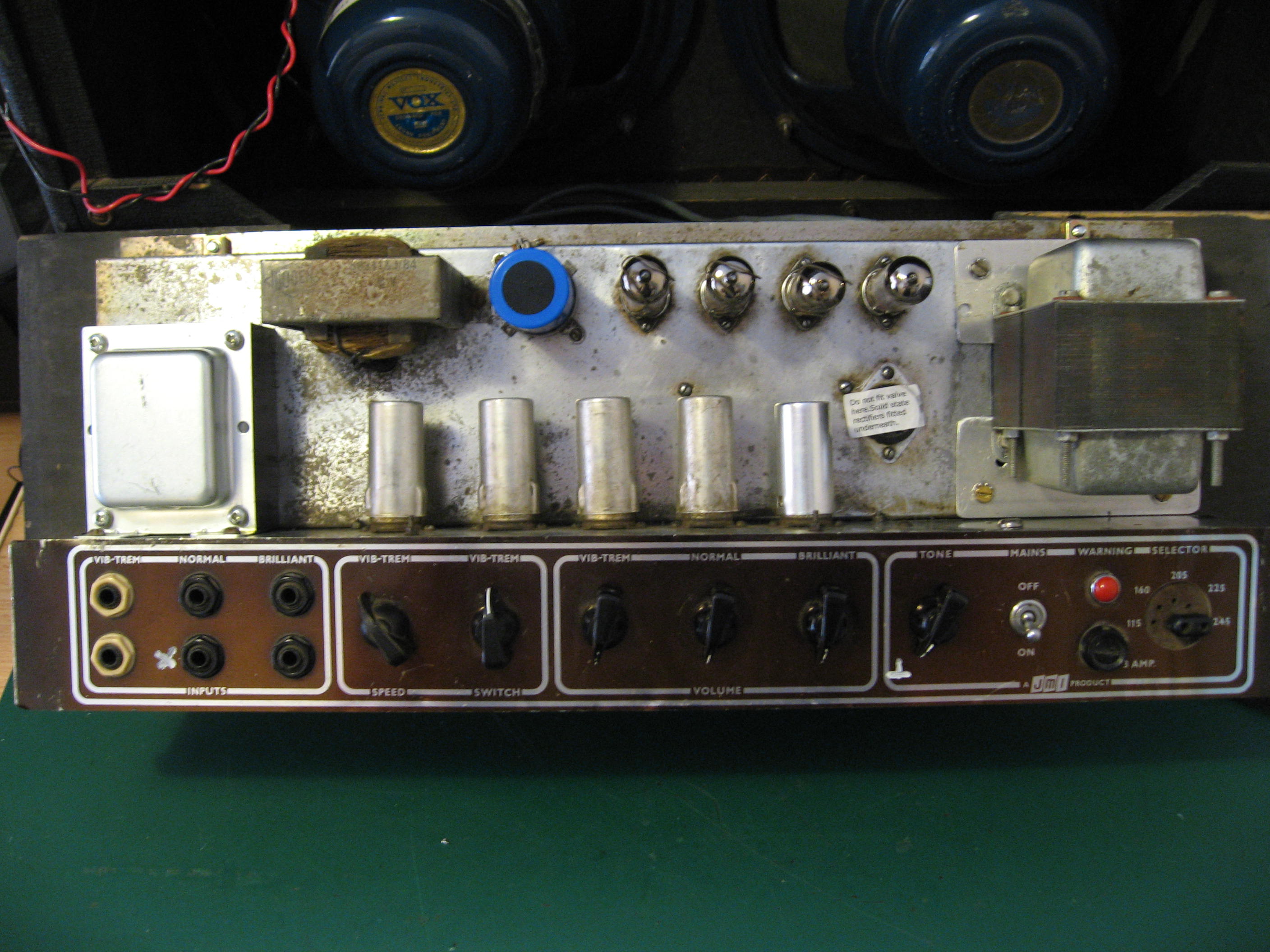 Managed to get most of the grime off the chassis, I gave the valve sockets a good clean with contact cleaner and a fine dental brush. I squared up the mounting plates for the mains transformer, fitted the new output transformer, and also a new power supply capacitor as the old one was leaky. 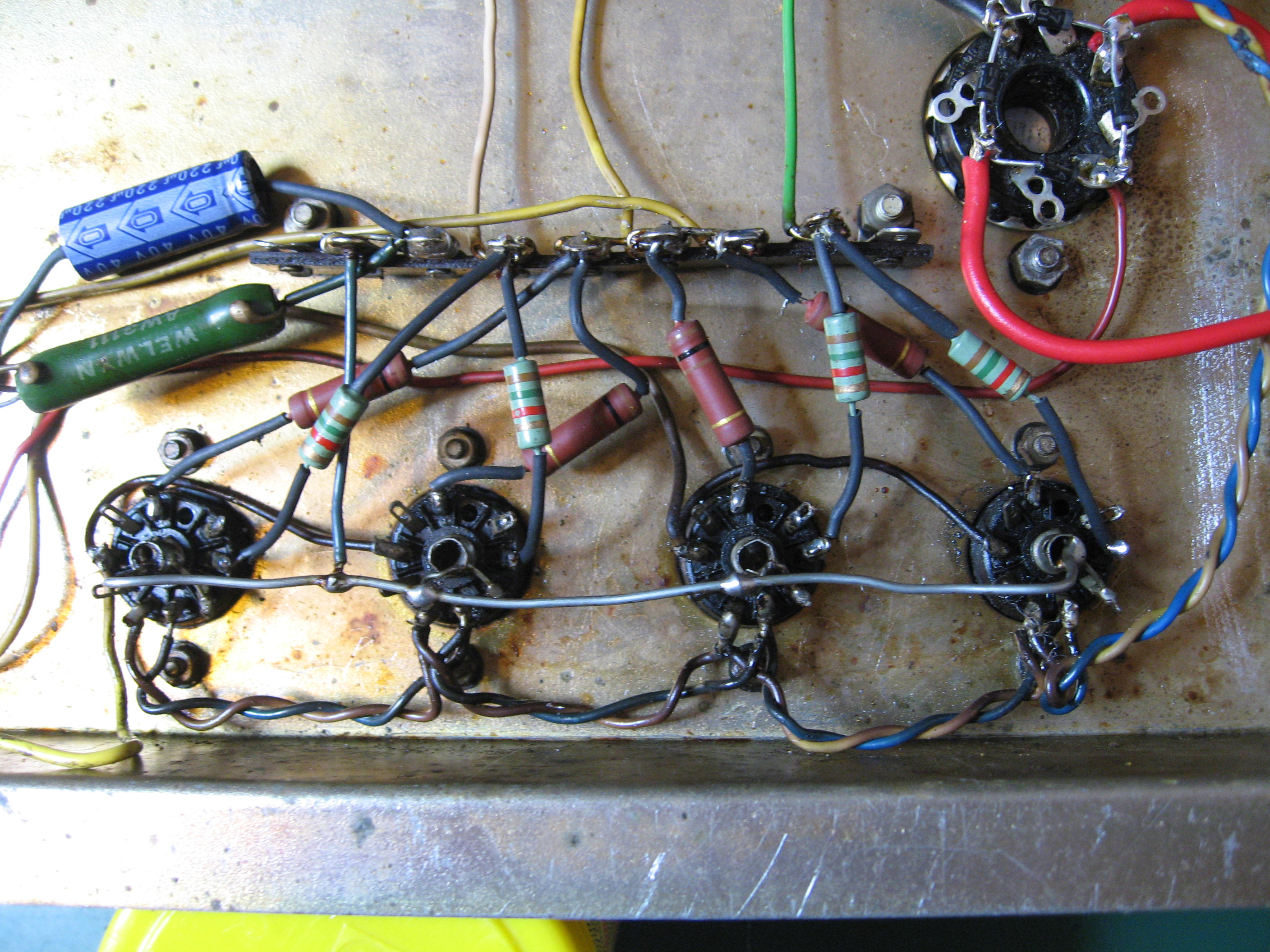 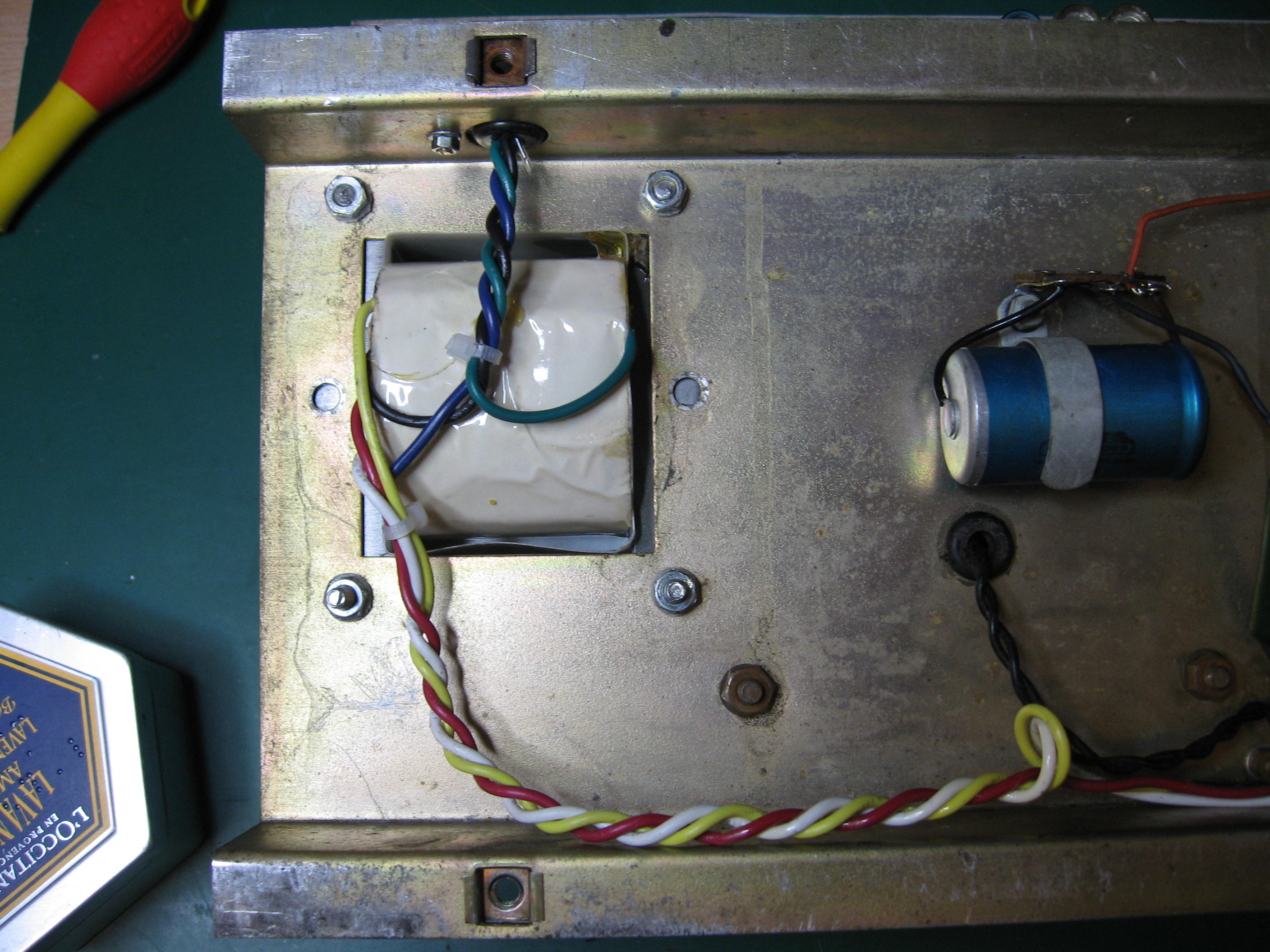 The amp needed an ECC82 to replace the ECC81 that had been incorrectly fitted in the modulator position.

Having completed the repairs, I ran some signal and voltage checks. All voltages were in order, and power output was now over 33 watts! The amp ran pretty warm, but sounded great!

I called the customer to give him the good news, (he was pleased that I had been able to get the amp fixed in time for a gig that weekend).

He called me after the weekend to let me know that the amp was back and sounding as good as it had previously, he was really pleased.